Just when I thought the pain of the braces was a thing of the past, I was introduced to a new instrument of torture–the elastics. 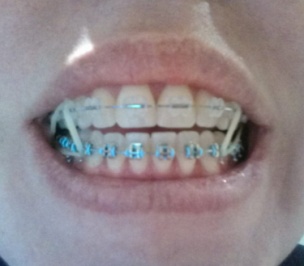 I knew that it was just a matter of time before I had to get the “elastics” (which are the official name for “rubber bands for braces”). But I had no clue what they would entail. I knew they were supposed to move specific teeth but that was about it.

So I got my first set and unfortunately they had to be in the very front. I started with a regular triangle that you can see if I open my mouth at all. They warned me that they would hurt for at least a few days. Given how sensitive my teeth are, I knew I was in for trouble.

The first day wasn’t terrible, but that first night I started waking up in pain. The second day was almost unbearable. I started taking a lot of ibuprofen all day and night and was still waking up every few hours over the night. The elastics also started to rub my lips to the point of bleeding.

After about 3-4 days of wearing them almost constantly, the pain did get better. They just became inconvenient and uncomfortable.

4-5 weeks later I went in for a checkup. Apparently I have not been wearing them as much as I should be. It’s been tough because I have been traveling a lot the last 2 weeks. Hopefully I will do a better job now.

But of course they moved them. Initially the triangle was just to pull the top and bottom together to close the gap. Now it is to move them left to right. If you can see in the picture, my top and bottom do not line up exactly right. They are about half a tooth off. So my new “elastic formation” loops the elastics the whole way from the back of my mouth to the front, top to bottom, on both sides.

The pain has started up again today, but I am hoping that it will not be like starting from scratch. I’ll be anxious to see how much I can move them if I wear the elastics as much as possible between now and my next checkup!

Edited: Want to see how my teeth look after my first four months with the elastics: Read: Mom Gets Braces: More Rubber Bands (8)

For more in my braces saga, you can check out my previous posts: