It might not even be Halloween yet, but that doesn’t mean it’s too early to think about the holidays. In fact, most mainstream personal finance gurus suggest you start holiday shopping as early as August, as to spread out the cost. You probably have a long list of friends and relatives for whom you’re buying a gift this holiday season, and they all deserve their own special level of attention. But don’t forget about gifts for the most important people in your life: your immediate family.

The Tablet PC is all the rage now, and will surely be a hot gift item this holiday season. Kids want them because they’re sources of entertainment — you can watch movies and TV shows, listen to music, and play games on them. They appeal to adults for the same reasons and then some. You could conceivably use your tablet for almost anything your laptop does. That is to say that they make wonderful gifts for everyone. Yet there is just one drawback.

While the decision to purchase a tablet for your family might be easy, the decision of which tablet to purchase is not. There are dozens of tablets on the market of all makes and sizes, which can create confusion. Different tablets will suit different types of users, so each family will make a different decision. Here’s a quick guide to the three (really four) different tablet types and the benefits they provide.

When you think of tablets, chances are you think immediately of the iPad. It wasn’t the first tablet on the market, but it certainly defines modern tablets. That has been a major part of Apple’s charm. They look at a slow market and revolutionize it. FIrst came the iPhone, which changed the way we thought about smartphones. The iPad similarly expanded our notions of what a tablet can accomplish.

In terms of family tablets, the iPad likely rules supreme. The App Store is filled with free and premium applications that the whole family can enjoy. Best of all, most of these applications cost only $2 to $3, so you won’t go broke while loading up your iPad. It comes pre-loaded with a number of games, too, so you can take advantage of them before digging into the extensive iPad games library. Best of all, the hottest apps and games typically get released for the iPad.

What really sets the iPad apart is the video experience, which you’ll see, after owning a tablet, is one of its main benefits. The large screen provides plenty of viewing room. Yes, it’s smaller than most computer monitors, but it has pristine resolution. You can also hold it relatively close. I’ve found that watching a movie on the 9-inch iPad is much more enjoyable than a 13-inch laptop screen. Movies can come from many sources, too: your personal PC library, the iTunes store, or Netflix. Having the Netflix app, by the way, might be the single best feature of the iPad. It’s so common, yet so valuable. It’s easily my most-used app.

The downside to the iPad is immediately clear. As with most Apple products, it runs fairly expensive. The least expensive iPad costs $499, and that’s before you buy a case (a necessity) and apps. If you require more storage space — and movies do take up plenty of space — you’ll end up spending even more. The 32GB version costs $599, while the 64GB version costs $699. If you need 3G service, each model costs an additional $130, plus monthly data charges. Thankfully, for in-home family uses the WiFi-only version is perfectly useful. 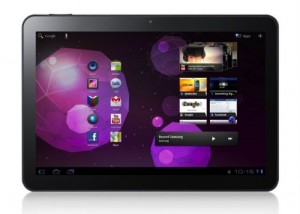 Here’s where the tablet market gets really confusing. Apple makes it simple. It’s one manufacturer making one tablet. Google’s Android, however, is a platform rather than a device. That is, many different manufacturers can create tablets using the Android platform. You might see Android tablets from well-known manufacturers, such as Samsung and Motorola, or you might see them from unknown brands. Many discount brands, including Vizio, have also chosen Android as their tablet platform. This can make for a tough decision.

In general, the Android platform is a powerful one for tablets. Its best feature is that it’s constantly improving. While Apple does release new operating system versions from time to time, Android is constantly improving. It has to, or else it will always stay behind Apple. So while a tablet you buy now might run one version of the Android OS, it could get an upgrade in the not so distant future. That means you’ll get more features on the same device.

Android also has a robust app market, the Android Market, which features thousands of popular titles. There are ups and downs to the Market. The upside is that it contains far more free apps than Apple’s App Store, so you can enjoy more for less. At the same time, Google does not stringently screen applications, so there are a lot more poor ones in the Android Market than in the App Store. Still, if you do your homework and read reviews you should be able to find the best apps. Problem is, many people don’t want to do the homework before the buy an app. They just want the app. That is a completely understandable stance.

If you’re looking for something cheaper than the iPad, Android is definitely the way to go. Unfortunately, once you get down into the lower price points you don’t really know what you’re going to get. Even trusted brands, such as Samsung, can flop with Android tablets. That’s what happened with the original Galaxy Tab. Of course, the nature of Android means that these manufacturers can get a second chance. The new Samsung Galaxy Tab looks fabulous and has gotten rave reviews. The same goes for the Motorola Xoom. These are certainly high-end tablets.

Unfortunately, there are plenty of tablets that just aren’t worth your time. Anything from a manufacturer you don’t recognize is probably not going to be worth the hassle. It might be cheap, but the old cliche applies to tablets heavily: you get what you pay for. Instead of buying a cheap, no-name Android tablet, you’re probably better off holding the purchase until you have enough saved to buy a reliable one. 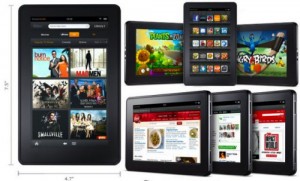 While the Kindle Fire is technically an Android tablet, it doesn’t bring the true Android experience. In fact, it is thoroughly an Amazon tablet. The app store is not the Android Market, but rather the Amazon App Store. There is no Netflix app in that App Store. Instead, Amazon offers its own Instant Video product, which is available for Amazon Prime users. Music and movies are purchased through Amazon’s store. And ebooks, of course, go right through the Kindle Store.

What advantages, then, does the Kindle Fire have over other Android tablets? For one, it comes with a household brand attached. People know and trust Amazon. It also has a singular focus: media. The Kindle Fire is made for watching movies, listening to music, playing games, and reading books. While all tablets are in some ways made for this, it is really the only reason to get a Kindle Fire.

If you’re not an Amazon Prime user, however, this probably isn’t the tablet for you. Again, it’s made for Amazon loyalists who want a focused, cheap tablet. In fact, at $200, this is probably the only tablet that goes against the “get what you pay for” mantra. It really does provide power for a cheap price. 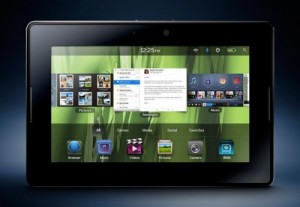 The BlackBerry has seen its share of poor coverage in the past few years, but they really outdid themselves with the PlayBook. That is, they outdid themselves in terms of the PlayBook’s potential. The hardware is on par with the best of the tablet industry. It runs fast and has a crystal clear display, so you’ll have no complaints when playing games, using apps, and watching movies. The user interface is also clean. In fact, of all the tablets on the market it’s easiest to run multiple apps at once with the PlayBook.

The PlayBook is a great option for people who already own BlackBerry smartphones. They go hand-in-hand — there’s even a dedicated app that bridges tablet and smartphone. Also, pairing is currently the only way to get contacts, calendars, and email on the PlayBook. Thankfully, an update is coming soon (it might be out by the time you read this) that will bring along email, calendar, and contacts. It will also bring Android apps, which will help fill out BlackBerry App World. There should be plenty of apps available.

With the PlayBook you’ll get state of the art hardware to go along with improving software. RIM is apparently committed to improving the device, too, as they’ve already released a number of updates. This latest update, which will also include a video store, should vault the PlayBook into public consciousness. Best of all, the price is a bit more palatable than the original. At first it cost the same as an iPad, but RIM is running various promotions throughout the holiday season. You can get a 16GB PlayBook at various retail outlets for as little as $299.

Joe Pawlikowski is the editor of Prepaid Reviews, where he provides information about prepaid cell phones and service.

From time to time we accept Guest Posts from our readers and friends. Contact Tricia for more information.