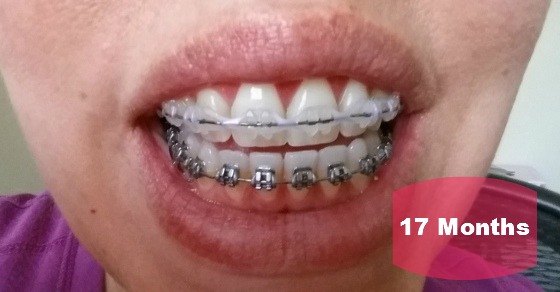 I’m happy to say that I am going to be ending my “Mom Gets Braces” Series before too long because there is not much left to report!

Today I had a checkup where the orthodontist proclaimed my teeth practically perfect. After 6 months of wearing the elastics pretty much around the clock (although I wasn’t the BEST at it), I am now going to be wearing them only at night. The midline is just a little off center, but I don’t think that it will ever be exactly right. The bite is as good as it is going to get given that we had to do the expansion on the top. I can actually make my front teeth touch each other now!

My natural bite has the top just slightly over the bottom now. Apparently that is close enough or within the “normal” range. My daughter is about to have hers taken off and hers pretty much exactly touch each other.

If my teeth are great, why do I have to keep the braces on?

When we first started all of this, I was estimated to need the braces for 30 months total, including the Palate Expansion. After the palate expansion went so well, he lowered me to 24 months. Right now I am at 17. Because I am an adult, it takes longer for the teeth to solidify in place. My orthodontist said he would rather keep them on a little longer and let them have time to firm up then to remove the braces too soon and have them move back.

Part of me just wants them off so badly. The other part of me doesn’t want to have wasted all of this time and money only to have them go back to the way that they were. I asked if he could at least take them off before Christmas rather than having to wait until January, and he agreed that would be fine. I just have to remind him in October.

I keep staring at the pictures wondering what my teeth are going to look like when the braces come off. I guess I will know in 6 months!

Edited: You can see the final post, the big reveal!! Mom Gets Braces (10): All Done! What Now?

For more in my braces saga, you can check out my previous posts: