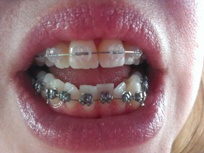 It’s been awhile since I updated my braces saga and I have to admit it almost all came to a crashing end this weekend.

Two weeks ago I had my bottom braces put on. You can see from the picture how jacked up my bottom teeth look in the front–especially now that the metal is on them. They are a little turned and crooked and one of the reasons that I started this whole process. For all of you who have been telling me that you don’t think that I need braces, now do you see?

I never updated that my palate expansion is done! Apparently the Rapid Palate Expander did its job (even though I’m an adult) and they got even more expansion than they had hoped for. So now we have room to work with on top to get everything straightened and deal with the overbite. No more overlap in the middle!

Adjusting to the Bottom Braces (and Swallowing Them)

The bad news about my bottom braces is that they have to be metal while the uppers are clear. The uppers do not show nearly as much as the lowers. And they rub in a different way. But the lowers are a little bit smaller. They take getting used to even if you are already used to the uppers.

When they put the bottom braces on, I started immediately getting sores. I tried not to use the wax so that my mouth would toughen up but they hurt so bad after a few days that I gave in. I waxed the offending brackets, started swishing with the Colgate Peroxyl Mouth Sore Rinse (thank you, Mr. Kinman!), and liberally applied Orajel. Within a week, I was getting used to the bottom braces.

Then all of a sudden Saturday night happened. After eating dinner, I felt something weird. My back bracket was missing. Apparently I swallowed it while eating! I had been warned that because the bracket was on a porcelain crown, it might come off. They said if it comes off twice, I would have to have a metal band put around the tooth as an anchor. I expected that it might come off. I didn’t expect that I would eat it.

I kind of lost it. Between the palate expander issues and the pain of all of the other teeth and the sores and now the metal working its way through my digestive tract, I decided enough was enough. I’m tired of talking funny. I’m tired of getting stuff stuck in them. I’m tired of the pain. I wanted them off!!!

Monday morning I called for an orthodontist appointment and they told me they could get me in today. So I went in today prepared to tell them that I couldn’t take it anymore. I only have two back teeth that don’t hurt to chew with, and now I need a band on one of them…and I know how that will hurt. I’m not willing to sacrifice eating altogether.

Thankfully, my orthodontist works with a lot of adult patients. He understands that we are used to negotiating and need babied a little bit. We worked out a deal where we are just going without the back bracket for a couple of months. My palate expander is coming out the third week of June, and we will then deal with the bottom band at that point. I’m okay with that. Not happy because I still hate the whole process. But I’ll at least make it until June.

Read about my journey from the start.