Earlier today I visited the doctor about some back pain. He suggested that I start taking Aleve twice a day. I’ve never used it before, so I headed to Kroger to pick up a box. When I looked at the side of the box for the instructions I had to do a double–no triple!-take! Was it really telling me that I had to have 3 alcoholic drinks a day to make it effective? And to take it for longer than I am directed? 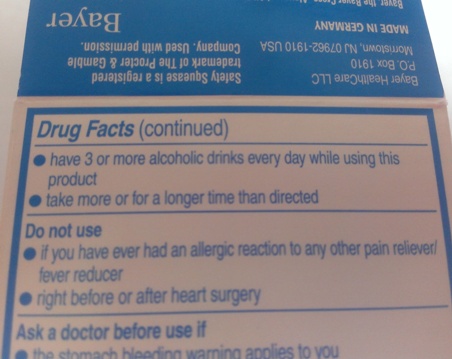 Finally after flipping and reading back a few paragraphs I discovered that I would have a higher chance of stomach bleeding if I did all kinds of things, including being age 60 or older, or–you guessed it–drinking 3 alcoholic drinks a day.

I’m thinking that if they are going to put instructions in such small print on a box that we are probably reading because we are already in pain, they shouldn’t get us all excited about requiring that we have 3 drinks a day. Or maybe it’s their new marketing ploy?

Either way, I’m now considering whether I would rather have the Aleve or the 3 drinks a day to make my back pain feel better.