You are here: Home / Family / Do Your Kids Say the Pledge at School?

School has started again, which means the memes about the Pledge and prayer in schools are once again circulating on social media. We can agree to disagree on whether a “moment of silence” is a substitute for “prayer.” But the issue of the Pledge of Allegiance is one that really pushes my buttons year after year. Here’s an example of one of the Facebook posts I often see: 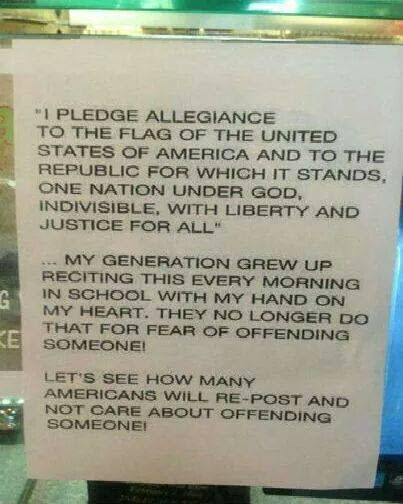 It reads: “My generation grew up reciting this every morning in school with my hand on my heart. They no longer do that for fear of offending someone! Let’s see how many Americans will re-post and not care about offending someone.”

And re-post they do! I see it being shared over and over again. So much so, that people tend to believe it without a second thought. I mean, who is there to argue against it?

For example, my mom (who is quite liberal) called me one day after volunteering at my niece’s school. She said “I was in the front office signing in and everyone stopped and said the Pledge and then had a moment of silence. I couldn’t believe it.”

Well, I can believe it. Because I have spent the last 13 years volunteering at 4 different schools and every one of them said the Pledge (followed by a moment of silence every day). But I suppose if you aren’t actually in schools, you wouldn’t have a reason to know that.

I have two big problems with the post above:

1.  The Problem Is Not the School

The vast majority of schools do say the Pledge. In fact, in the majority of states it is actually the LAW that schools offer the Pledge every day. A handful of states give kids the option and a handful don’t address it at all.

Furthermore, I’ve done some very unscientific studies about how many kids actually say the Pledge when offered the opportunity. In my VERY conservative school district, most of the kids do NOT say the Pledge every morning of their own volition. In fact, my kids have told me for years that either a few kids in their class say it or none at all. (Last year Jillian was the only one in her class and even learned it in Spanish to say once.)

Furthermore, it appears that the younger the kids are, the more they are likely to say it. The older they are, the less likely they are to participate (are they too cool??).

Are they refusing to say the Pledge in protest? Maybe, but not likely. Most of them don’t say it just because they don’t feel like it. Or because other kids aren’t saying it. They don’t feel strongly enough about it to care to say it when given the opportunity.

This is a perfect example of PARENTS needing to raise their kids and not expecting the school to do so. You can’t complain about the school not giving your kids the chance to say the Pledge or a silent prayer when they are given the opportunity for both every morning and do not take it.

I know I made that big and bold and it feels like I am yelling, but I can’t help it. I grow weary of everyone complaining about the next generation being ruined by our schools when really it goes back to the parents.

I know I shouldn’t even have to say this again, but it bears repeating because I see things like this every dang day. Don’t allow yourself to get all riled up about something happening when it isn’t even really happening!

Are there SOME schools that do not say the Pledge? Yep. And some that stopped have restarted because of backlash. But they are really in the minority. Are there some kids who choose not to say the Pledge for religious reasons or in protest? Yep. But if they are truly doing it for those reasons rather than just because they are lazy or don’t care, at least they are standing for SOMETHING (or sitting, as the case may be).

After all of this, I am curious….

Do your kids say the Pledge of Allegiance at school?

I guess that is really a 2 part question. 1) Does their school say it? 2) Do they recite it themselves?

Maybe the comments will either bear out what I am saying or completely prove me wrong!