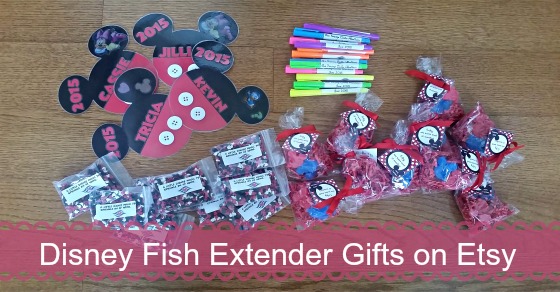 I’m not a majorly crafty person, but I am creative and resourceful. When we went on our first Disney cruise, I made our Fish Extender and all of the gifts that we gave out on the cruise. As time went on, the gifts we gave were a little less creative and crafty and I started to feel guilty. I solved that problem this year!

First, let’s get a few things out of the way.

What is a Fish Extender? It’s basically like a Christmas stocking that people use for a Secret Santa-type thing on Disney Cruises. It’s not mandatory. You get together a group in advance (or maybe even just your own friends and family if you already have a group going together). Each group can decide if there are any “rules” like no alcohol or only one gift per family or whatever. But in general it’s just a fun little thing to do especially if you have kids. (As if a Disney cruise is not fun enough on its own!).

What kinds of gifts do you give? The types of gifts we have given and received has varied GREATLY! You might get candy, handmade scrapbooks, magnets, treats from the person’s city/country, pirate accessories, popcorn, etc. There really are not any boundaries. I would guess each family spends SOMEWHERE between $3 and $10 per cabin they are assigned. But it largely depends how many cabins you are assigned.

Do you have to MAKE the gifts? You do not. Some people will. And some people will really go all out. I’ve loved the handmade gifts and the store-bought gifts and even the boxes of movie candy. The best cruises are when you get a little bit of everything.

Which brings me to my problem this year. I wanted to make something. I really did. But time just got away from me (despite having the cruise scheduled for TWO YEARS). I decided that I could stress about it and throw something together or figure out a better solution.

My better solution was Etsy.

Although I’ve known about Etsy forever, I’ve never actually bought anything there. I just didn’t ever consider it as as place that had anything that I really needed. Until I needed handmade Fish extender gifts.

I did a couple of different searches on Etsy and ended up finding so many great possibilities! I searched for both “Disney Fish Extender” and “Disney party favors.” Financially, I spent less than I would have if I had purchased all of the materials. From a time standpoint, it would have taken me countless hours to make the things I bought because I just don’t have the experience.

Do I feel guilty? Only a smidge. But really, I did spend a fair amount of time looking for just exactly what I wanted to hand out. I made a short list and talked to the family to see what they thought. I then worked with each of the designers to customize what I was buying.

I ended up doing 3 small gifts to hand out throughout the week as opposed to one big gift.

I got highlighter pens for the first night that say “Our Fantasy Cruise Highlights June 2015.” I figured they could use them on their Navigators and then take them home as a nice reminder of the cruise. (These were done by ilvdisney2008) 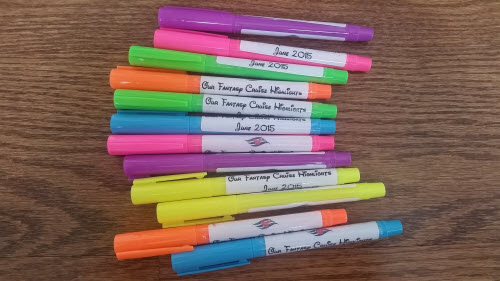 Middle of the week we will be handing out bags of soap in the shape of Mickey Mouse that say “Enjoy the Sweet Smell of Vacation.” (Yeah, I came up with that) (Those I had done by SweetbodySoaps) 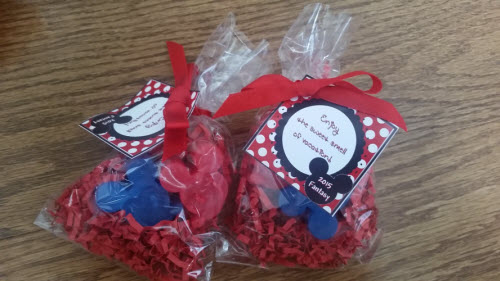 On the last night, we will drop in little bags of Mickey head candy sprinkles that say “A Little Disney Magic to Sprinkle on at Home.” I had just the bags made up and then added the labels myself. That last night is always so sad packing up that I figured it would be nice to have something to pack away and use later. (Purchased from CrowesCakeSupplies and she even made a custom order for me to have them put in bags rather than vials so they would be easier to pack) 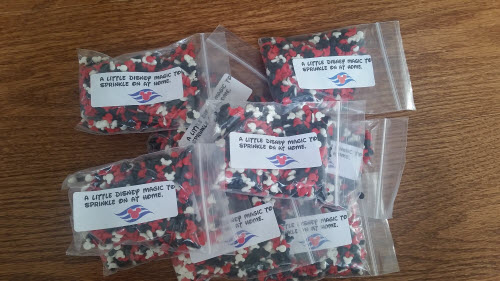 The total that I spent for the 3 different gifts for 10 cabins was $77. I figure for 3 gifts a cabin, that isn’t too bad at all. I could probably have only done 2 of the 3 and it would have been sufficient. Or even just the soaps alone at $40.

As an aside, I also ordered some pretty awesome magnets for our door. Again, I usually make those. I’ll probably still try to make a few. But if I don’t get to it, I’ll be okay with these because they are cuter than what I make anyway! And if you don’t actually have a Fish Extender itself, you can always look on Etsy for that.

So for all of you out there fretting over handmade gifts (whether it’s for a cruise or party favors or something else), I offer up that you should check out Etsy and not feel a single moment of guilt. We all have our talents. Some days I think mine is online shopping!!